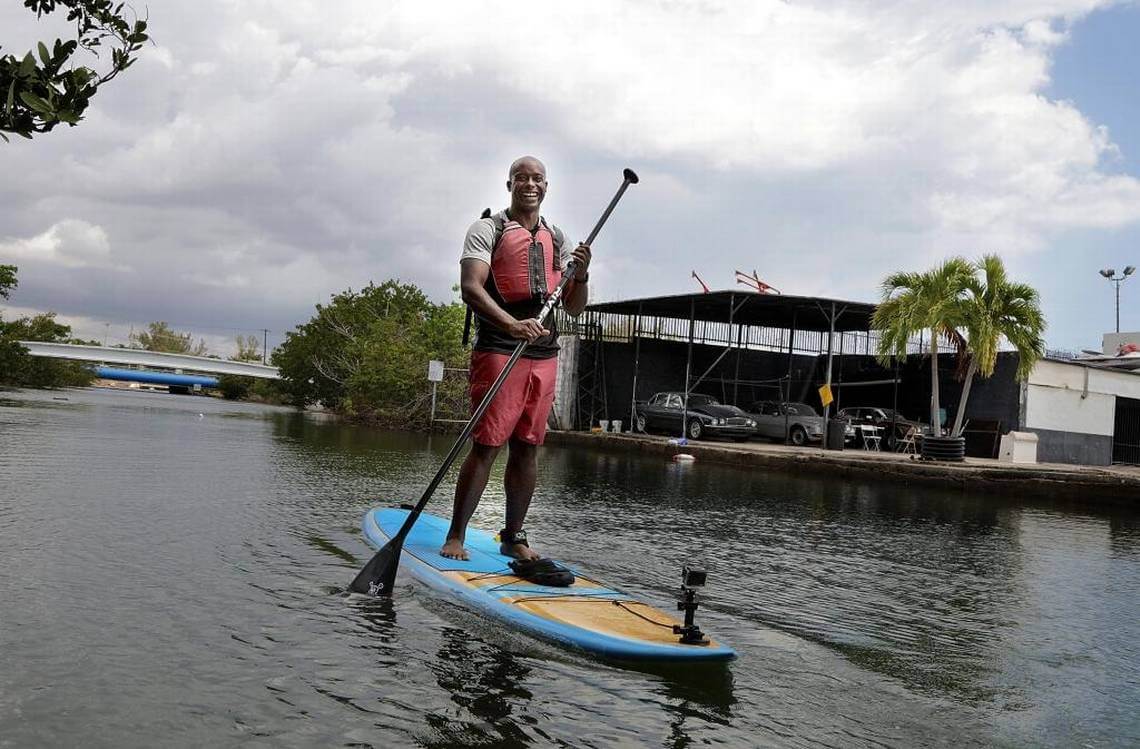 He got fed up with Miami traffic, so now he commutes with dolphins and pelicans

Parker Lake got sick of the rat race. Sick of working in a cubicle. Sick of commuting on Miami’s mean streets. Sick of being overweight from sitting at a desk or in traffic jams.

So Lake quit his unfulfilling job, sold his car and moved to a house on the Little River. Road warrior no more, he paddles to two new jobs on a stand-up paddleboard. The rude drivers who used to accompany him on his travels have been replaced by manatees, dolphins, pelicans and spotted eagle rays.

Lake decided to stop despairing and daydreaming and go outside himself, as well as the confinements of office and automobile. He’s lost 45 pounds. He’s gained peace of mind.

“I thought to myself, ‘I’m spinning my wheels in more ways than one. I’m not happy with the commute, I’m not happy being a salesman,’” he said. “Now I find myself fulfilled. The difference in pay is not insignificant but I figure I’m paying to be happy.”

One on One Stand Up Paddle Private Lesson

On Thursday, Lake paddled three miles home from his part-time job as a tour guide at theiPaddle Miami watersports rental center at Pelican Harbor Marina on the 79th Street Causeway. He paused at Bird Key, where a great blue heron launched from the trees. As the wind turned brisk and churned the Intracoastal’s waters, Lake balanced on his 12-1/2-foot bamboo Riviera Ron House board and gazed at the downtown Miami skyline. Then he headed up the river, which gets progressively grittier the farther west you go. He passed yachts parked behind luxurious homes, then helped construction workers fetch a fishing pole that had dropped in the water. He stroked onward past a flock of orange-beaked ibises, empty warehouses, run-down apartment buildings, a homeless man living under a bridge, walls covered with graffiti, trash floating on the surface.

Paddling to and from work, he can see and hear the cars on surrounding roads and bridges.

“I’m not part of that anymore and I feel great,” he said. “Drivers look at me with a look of longing, and I know what they’re thinking: ‘He’s probably on vacation. I need a vacation.’”

Lake’s other job is as a security guard at the Eden Roc hotel in Miami Beach. That’s a 12-mile, two-hour paddle from where he lives on Northeast 85th Street. He carries his work clothes and shoes in a dry bag backpack. He once paddled over a hammerhead shark on his route.

“This is a mode of transportation that I think more people will be choosing in the future,” he said. “Some people bike to work. I think everybody stuck in gridlock every day should consider an alternative. When I was cubicle- and Fiat-bound, my exercise consisted of walking into offices selling web technology. I got fat. Physically and mentally, I’m in a better place. Going to work is not a chore. You’ve seized the day by the time you get to your job.”

Lake, 44, is a Los Angeles native who earned an economics degree from the University of Southern California, where he was on the rowing team. He worked in China as an investigator for Pinkerton’s and in London in the financial printing business before moving to Miami five years ago to sell computer systems at UDT, a technology company in Doral.

“In California, the drivers are more polite than they are in Miami,” he said. “They use their turn indicator, they let people change lanes or cross the street. Self-awareness is the biggest difference between drivers here and there. Here, people are rude, they cut you off, they flip each other off, there’s lots of micro aggression wherever you go. In California you do not upset drivers because road rage never ends well.

Lake is adding mileage to his commutes whenever possible to prepare for Crossing For A Cure, a June 17 fund-raising trek from the Bahamas to Dania Beach. It’s a 61-mile paddle that will take 8-10 hours. Paddleboarders are raising money for cystic fibrosis research.

“There’s a degree of discomfort in this journey but it will be over in about eight hours,” Lake said. “Kids with cystic fibrosis live with pain all the time.”

Said iPaddle owner Manuel Castillo, who is helping Lake train for the event: “It’s no small feat going that distance. It’s a physical game. It’s a mental game. It’s the culmination of decisions leading to the lifestyle Parker chose to adopt.”

In exchanging car for board, Lake also wanted to set an example for his two daughters.

“If I transform what I do, that’s what I will be to my daughters,” he said. “I’d encourage everyone in Miami to get on a paddleboard. Or a kayak. A lot of people ride jet skis, but dolphins shy away from jet skis. Try paddling.”

For almost ten years, companies big and small choose ipaddle for their corporate outings and team building sessions. We pride ourselves on creating these memorable experiences that bring people together not only for fun but to teach them skills they can apply on the water and in the office !

Email us today to see how we can make your next event special.

See you on the water!

A huge thank you to all the volunteers and local paddlers who attended today’s river clean up!

Thank you to @seabirdstation for hosting this years event and all the work you do.

Also to @littleriverconservancy for enriching the community through education and preserving the important history of our river !

If you were headed where I’m headed you’d be up this early too.

Your patch of sand in the jungle. 🏝🏝🏝 #ipaddlemiami

You can't ask for much really. It's kayaking and at least they have a tour route. Affordable as well. Great place would come back - 1/02/2023

We had a great day on the kayaks. We were first timers but Martin trained us well and we had so much fun. Beautiful sights and saw a stingray! - 11/27/2022

Super friendly staff. Great place to rent a kayak. New kayaks and couple close islands that are fun to visit. - 10/29/2022

You can't ask for much really. It's kayaking and at least they have a tour route. Affordable as well. Great place would come back - 9/05/2022

Great time! We had a great time! The double kayak and dry bags were perfect. Take the time to visit all three islands if you can, very pretty!! - 9/05/2022

Our guide was absolutely fire he was super nice, very knowledgeable, and extremely fun. Loved him. ❤️❤️ - 8/23/2022